All About Breech Birth

All about Breech Birth

There are a few things which may increase the probability of a pregnant woman giving a breech birth. Research shows that women who are delivering a baby for the first time are more likely to have their babies in this position. An abnormal amount of amniotic fluid can also cause women to deliver babies in this position. Women who have a heart shaped uterus, medically known as ‘bicornuate’ uterus, may also have breech births.

For a woman to have a proper delivery, the baby must be in the head-down position so it can exit its mother with ease. In cases when this is not the situation and the baby is incorrectly situated within the mother’s womb in a manner that instead of the head, the feet come out first and the baby has to exit it like that only, it is called a breech birth.

In approximately 1 out of every 25 full term births, we notice breech births happening.  These breech births may happen with the baby in either one of the following three breech positions:

In this position, the buttocks of the baby point downwards. His legs are folded at his knees and feet. In a way it seems that the baby is sitting cross-legged inside the mother’s womb.

In the Frank Breech, the baby has his feet straight up near the head while his legs stick out straight up in front of his tiny body.

What happens if the baby doesn’t turn?

In most cases, it has been observed that by the time a woman is in the 36th week of her pregnancy, her baby turns down. However, this is not a one-rule-fits-all type thing as some babies do turn their heads down only in the 28th or 29th week. And if your baby has not yet turned your head down, nothing to worry about, because some babies may keep the head turning act till the very last moments until you go into labor. 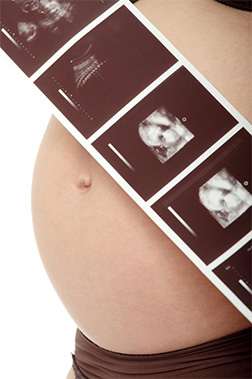 The reason why most women want their babies to turn their head down and come out this way is because having a baby come out with its head first makes the labor shorter and easier. This is because a baby in a head-down position allows the cervix of the mother to widen which consequently produces more hormones that are required by her during labor.

So not only does the baby find it easier to come out of the mother’s body, but the extra secretion of hormones benefit the mother as well.

In cases where the baby does not turn its head down on his own, you can do a number of things to help him to do so. For example, avoid sitting too long at a stretch and keep moving. You could also try getting on all fours and scrubbing the floor as this would allow the baby to change the position of his head and come to the front of your belly too.

If you are a woman who is in her late pregnancy, your gynecologist will conduct an exam or perhaps even an ultrasound and let you know the position of your baby. If the baby has his head down, you can have a normal delivery. If the baby is in breech position you will not be having a normal delivery and will be required to have a cesarean section instead.

Another option for Mother’s with Breech Babies: ECV

Since cesarean section is a major surgery and most women are hesitant in having it, another option available to women with breech babies is attempting an External Cephalic Version (ECV). Basically, this is an attempt made by your gynecologist to get your breech baby to turn in a manner so that his head points downwards and you can have a normal delivery,

However, the option of ECV is not open to all women; women with twins or multiple babies, women having any abnormalities of the reproductive system or women whose placenta is either misplaced or has detached from the uterus’ wall cannot have ECV done. If their babies are in breech position, they only have the option of cesarean section.

While more than one half of the ECV attempts are successful, this may not be true for all the women who get them done. Sometimes, after having an ECV done successfully, babies still turn their heads again which brings them back into the breech position. They may get ECV done a second time, but each attempt of ECV becomes more difficult as the time of birth gets closer.

While most women think that giving birth naturally without the assistance of any pain killing medications is no less than a myth, we would like to point out that it is actually quite possible. In fact, natural delivery has a few benefits to its name which give it quite an edge over caesarean sections. For example, a natural delivery is less physically and emotionally exhausting to recover from than a C-section. And not just this, but the recovery process in a natural delivery is even much faster than that of a C-section.

If your baby is in breech position, that obviously leaves you with no choice than to have a C-section, but if that is not the case, you can do several things to have a natural birth. Avoid gaining too much weight as women who are not overweight tend to have a smoother labor and they do not even require that many medical interventions. When you finally do get into labor, spend the early part of it at home moving around. Water is your natural tool for relieving pain and helping you relax so take a shower, use hot compresses etc. Only check yourself into the hospital when you notice that your contractions are consistently less than five minutes apart from one another.

Everything You Need to Know About Water Births

Taking Care of Mum during the Postnatal Period

Children that Bite and Smack