There’s a lot of advice about Children and TV and how not to let your children watch too much but what’s the most important factor in helping young children to watch television responsibly?

Child development experts say that routinely ‘plopping’ young children in front of the set when you’re feeling overwhelmed isn’t going to help their mental or physical health; however, setting strict limits on children’ screen time isn’t always effective either. Complete deprivation — removing sets from the family room and children’ bedrooms — may not be a practical way of limiting and controlling what youngsters watch.

What could help in teaching children about how to watch not just the right amount, but also the best kind of television, is for parents to adopt responsible viewing habits themselves. According to a new study published in the journal Paediatrics, what’s most important in children’s viewing habits is how much TV (or DVDs or online entertainment) parents watch. The researchers interviewed 1550 parents with children of 17 years or younger about both their own and their children’s screen time, and when possible, also asked the adolescents about how much television they watched.

The amount of TV the parents watched predicted the children’ screen time, and this association was even stronger than that linked to parental restrictions on TV viewing, where the TVs were placed in the home, or how much television parents and children watched together.

On average, parents spent about four hours a day in front of a screen, and those who watched more media had children who watched more in turn. In fact, every hour that parents viewed TV was linked to an additional half hour of screen time for their children. There were some differences according to age, however. Restrictions on viewing had some effect for children aged six to 11, and adolescents reported watching an hour more a day than their parents had estimated. 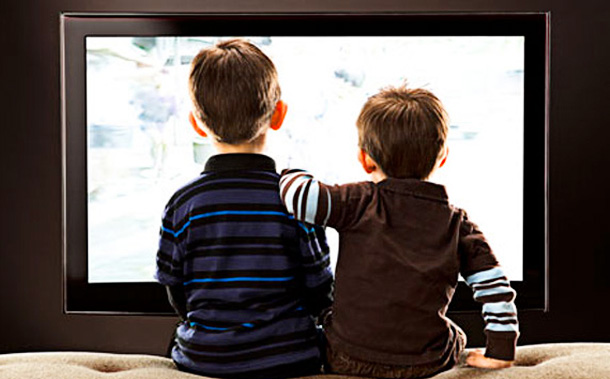 Because heavy viewing is linked to obesity, inactivity, poor sleep, and poor academic achievement, paediatricians have been recommending less ‘screen time’ for children (a maximum of 2 hours a day for non-educational TV). “Lots of parents are concerned about how much TV their children watch,” says Amy Bleakley, lead author of the study and a senior research scientist at the Annenberg Public Policy Centre, University of Pennsylvania. “We wanted to raise awareness of how their own media habits may be affecting that of their children.”

On some level, the results are not surprising, since behaviour experts say that the popular parental strategy of “Do as I say, not as I do” is virtually never effective in promoting healthy behaviours among children. “We are wired as children to pick up from our environment what we observe quicker than what we are told,” says Dr. Gopal Chopra, a neurosurgeon, associate professor at the Duke University Fuqua School of Business and founder of PINGMD, a medical app company. “Children are mirrors and we must be vigilant of the impact of our behaviour, including the exposure to “glass” (technology screens), as they will know it to be OK, and any discipline will fall on deaf ears.”

This is especially important when it comes to screen time, since children will not only imitate the quantity of parents’ viewing habits but the quality, say parenting experts. If you are using your screen time in unhealthy ways, your children will pick up on that and follow suit.

While there is some quality television worth watching, says Dr. Carole Lieberman, a psychiatrist in Beverly Hills, “most of the time TV is used as a way to escape from worries or things that are harder—like household chores. When a child sees that a parent escapes responsibility by plopping themselves in front of the TV, children learn to do this too.”

Reducing the risks of inactivity and poor health associated with heavy viewing, then, may have to start with adjusting parent’s behaviour, and not just children’s. Watching less TV is a good start. But child development experts say swapping out screen time to spend time doing other things with your children — such as hiking, playing sports or taking part in art or other projects — that will engage them physically, intellectually or emotionally is even better for their physical and mental health.

“What parents do instead of watching TV teaches children what to do with their time,” says Vicki Panaccione, a child psychologist and founder of the Better Parenting Institute in Melbourne, FL. “If they’re readers, children will take time to read, or play or colour. If they’re couch potatoes, then they will have little spuds.” © 2014 Time Inc

Notice: Trying to access array offset on value of type null in /home/customer/www/nannyoptions.ie/public_html/wp-content/plugins/elementor-pro/modules/nav-menu/widgets/nav-menu.php on line 1453
Menu