Getting your child to bed and stopping his chatter when he’s awake is in itself an ordeal for all the parents, but what to do when they don’t stop talking even when they are asleep?

Sleep talking, medically known as somniloquy, is a type of parasomnia. It is an abnormal behavior where children, and even some adults, talk while they are sleeping. Children talking in their sleep is a very common occurrence and is therefore, not usually considered a medical problem. Children can talk in their sleep as soon as they have mastered it during the day. Sleep talking also tends to run in families, so if you or your partner were sleep talkers, then there is a fair bit of chance that your child will also join the clan.

Sleep talking is so common in children that it is considered normal by most of the parents and doctors. Half of the children talk during sleep between the ages of 3 and 10. In a recent poll, it was found that every 1 in 10 children talk in their sleep more than a couple of times a week.

People usually think that sleep talking occurs while the child is dreaming, which may not be true. Scientists are still unsure whether sleep talking is linked to nightmares. The child can chatter at any stage of sleep but this mostly takes place during partial wakening stage. Children talk in their sleep by themselves and it is usually harmless. However, this can be a sign of some serious health condition or sleep disorder.

Children talk in their sleep both during phases of rapid eye movement (REM) and phases of non REM sleep. When sleep talking occurs during the phase of REM (which actually is the time children dream), the cause is dream speech getting a motor breakthrough. In simple words, the vocal chords, which are inactive during sleep, gets triggered during phases of dreaming and the child speaks out words that are spoken by the character in the dream he is having.

A child can also speak during phases of transitory arousals. This occurs when the child is transitioning from REM to non-REM sleep and vice versa. In both the cases, there is a phase of temporary wakefulness that the child undergoes while asleep that allows the toddler to talk, but the talk does not usually make much sense.

Sleep terrors and REM sleep behavior disorders are a couple of sleep disorders during which children tend to shout in their sleep. Children might kick, thrash and chant frightening screams during sleep terrors, also commonly known as night terrors. Children with night terror usually tend to talk during sleep. On the other hand, children with RBD tend to shout, yell and also act out their dreams, which often involve violent actions.

One of the most common reasons of sleep talking, and other sleep disorders, in children is poor diet. There are some dietary products that can hinder your child’s good night’s sleep. If your child is taking in too much junk food before bed time, he is likely to have an improper sleep. Carbohydrates in the right amount can also help your child sleep well.

There are myths related to dairy products causing children to talk in their sleep. However, it has been found that children who take in food high in tryptophan like yogurt, milk, eggs, fish, chicken, beans, tuna, cheese, nuts, oats, seeds and bananas tend to have good and healthy sleeping patterns. Giving your child a glass of warm milk or other dairy products before bed can actually boost the levels of melatonin and serotonin, both sleep inducing hormones. 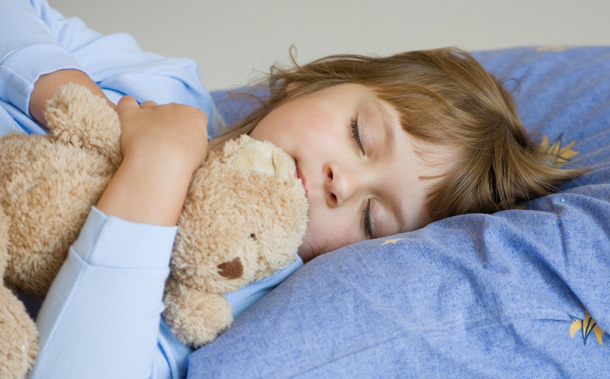 What Can You Do to Help Your Child

If your child talks in his sleep, make sure she/he does not have any drink that contains even a minimum amount of caffeine. Caffeine reaches its peak after about three hours of its consumption and can hinder your child getting a good sleep. Similarly, avoid giving your child junk food during night to help him sleep better. Try making the child eat at least three hours before his bed time to ensure digestion and controlled metabolic rates. Give your child a carbohydrate meal three hours before he sleeps; this will make him sleep better. Foods like chocolates, cakes, pasta and cereals are also good for the child and help him sleep well.

Don’t Wake up your Child

Instead of waking your child up while she/he sleep talks, guide your child back to sleep gently. Your child is asleep but may actually respond to what you’re saying. Waking them up is not just dangerous for but might make it difficult to put her/him back to sleep.

It is not recommended that you talk to the child about his sleep talk. This is going to make the toddler anxious about sleeping and will hinder a quality sleep. This might be a short lived phase for your child and will pass. Don’t over think about it and enjoy every moment with your child.

Sleep talking is a common thing among children and tends to fade away as he grows. Unless very serious, don’t worry when she/he murmurs in sleep because she/he doesn’t have any control over it. Improve your child’s eating habits, read him a good bedtime story and kiss her/him good night, because this phase will pass.

The 3 Rs of After School Activities

Dealing with Frustration and Anger Issues

Get in touch & let's make something
awesome toghether!